I saw “Interstellar” last night in Webster at the AMC Loews. Before I get going, I recommend you check it out, at an IMAX theater if possible.

After gawking at the run time, two hours and 49 minutes, I was concerned that the film was going to be an arduous journey. That could not have been further from the truth. The film was riveting and intense. The film captured my full attention and everything around me seemed to melt away.

I had heard a bit about the film on a podcast I listen to called “Star Talk” with Neil DeGrasse Tyson. I recall him mentioning in the question and answer section of their show that the film got most of the science correct. I was impressed that such an esteemed and well-regarded physicist gave it the “thumbs up”. Interstellar travel is a topic I don’t know well. When someone like Dr. Tyson chimes in it helps to give me a frame of reference while watching.

I experienced just about every emotion while watching this film. There were heartfelt moments that gave me pause as well as funny moments. At one point, I was so engrossed in the film that when a large object crashes into one of the characters I was so startled that I just about had a heart attack. The characters were engaging and likable, except of course, Matt Damon. I thought that McConaughey’s performance was a bit stiff at times, but Anne Hathaway and Jessica Chastain were magnificent. 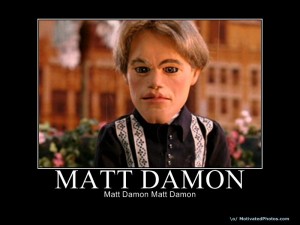 I’m not a huge Christopher Nolan fan. I loved his Batman films but The Prestige and the hype ridden Inception left me a bit bored. The way that Christopher Nolan captured the time dilation issues associated with interstellar travel was remarkable. It reminded me a bit of that film “Primer” albeit much less complex and easier to follow. A couple of people I spoke with mentioned that they thought the film was a bit befuddling but I didn’t get that at all.

The special effects were quite solid and the use of robots throughout the film worked well. As a bit of homage to 2001 A Space Odyssey, the robots were often used as comic relief. The repartee between McConaughey and one of the robots was particularly amusing and kept things light. I liked that each robot had a unique personality. It would appear that we’ve finally overcome that annoying monotone robot voice. I look forward to having a sarcastic robot over my shoulder pointing out my inadequacies.