In a departure from my typical movie experience; I chose to see Jurassic World in 3D. Because I saw the film in 3D, my review is centered on the 3D experience. I’m going to give this film two ratings based on my 3D experience. I recommend you check it out in standard definition. Don’t bother seeing it in 3D.

I was but a wee lad when the first Jurassic Park came out. The idea blew my young mind. Dinosaurs? IN REAL LIFE?! My next door neighbor purchased me a copy of the movie; much to my parents chagrin. Let’s take a look back at the trailer for that original film:

Oh, sweet nostalgia. In contrast, let’s take a look at the trailer for “Jurassic World”:

Some similarities, some new stuff. I have to tell you, I was pretty excited at the prospect of seeing this in 3D. I had high hopes that the dinosaurs would be going buck wild all over the screen. The 3D effects were disappointing. They were unnecessary and it felt like they were an afterthought.

To be fair, some parts of the 3D were cool. Here is the dilemma. The film itself was pretty awesome, seeing it in 3D was not great. The heavy price tag associated with the 3D just turns me off to the whole concept. I recall seeing Beowulf in 3D, now that was amazing. They took the time and made a great experience. The movie itself was pretty idiotic but the effects were incredible. 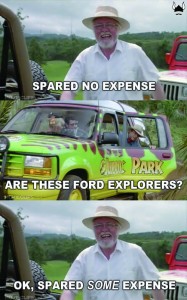 So this brings me to the actual film itself. I enjoyed it; it brought back some happy memories for me. A few things bothered me, specifically with the casting choices. In the first film they struck gold with people like, Jeff Goldblum, Sam Neill, Richard Attenborough,  Samuel L. Jackson and last but not least, Wayne Knight. This go around the casting was just not that great. Let’s start with the obvious: Chris Pratt was great. I had reservations about him after watching him on Parks and Rec where he plays a buffoon. Judy Greer was her usual self. Overacted, emotional and annoying; thankfully she wasn’t on the screen long. Aunt Claire played by Bryce Dallas Howard was also annoying. Though not nearly as annoying as Greer.

The dinosaurs were magnificent. The cool thing about the film, was there were many terrifying dinosaurs. The water dinosaur was my favorite, that thing was epic. The idea that you could train Raptors was unique and fresh.

The subplot with the military guy wanting to use the Raptors as a weapon was absurd. It was unnecessary and should have been cut. That’s enough for now, check this out in standard definition in theaters.