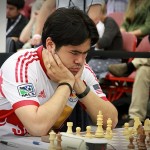 Another exciting day in Tromso, France managed to eek out a victory over a tough Armenian team and (much to my chagrin) the Americans lost to the Dutch. The Russians managed to climb to the top five once again after thoroughly dominating wily team from Macedonia (FYROM – Former Yugoslavian Republic of Macedonia). As to be expected there were many… Read more →