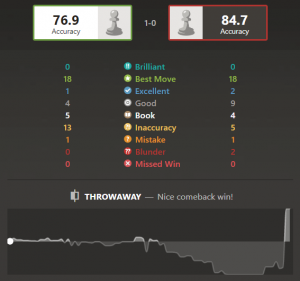 For the first time in years I beat a GM. Since I stopped playing on ICC and started playing on chess.com I noticed that I haven’t been paired with titled players as often. This is probably due to the fact that chess.com has more members than ICC and so the player pool is deeper. That said, this game was fairly wild and I really only won because in the final seconds of the game he made a terrible blunder that lost him his queen: