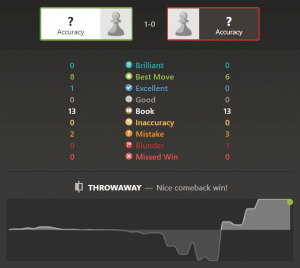 I recently got up to a record high rating for me on chess.com, 2214. Of course yesterday I spent like 4 hours playing and had a precipitous 100 point fall. Such is chess I suppose. My play yesterday didn’t feel that bad, it felt various things just weren’t going right in each individual game. In some games I wasn’t managing my time well and getting flagged in won positions. In others I couldn’t finish clearly won positions. Some days it feels like nothing goes right.

Anywho, I managed to catch someone in one of my home brewed opening traps that I found a while ago. I like this line because it forces black to find some rather difficult moves and forces black to walk the razors edge. I found this line when I was playing in a correspondence game a while ago. It’s rare that I’m able to essay it over the board, but every once in a while someone will play the correct move order and I’ll catch them in my preparation. When I last analyzed this line, with computers, it said that the position was roughly equal; but the computers didn’t correctly asses the position, and even claimed that white was worse at various points.