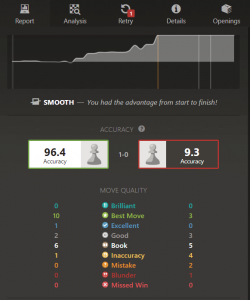 This week I have a fun little game to share, as well as a new segment I’m calling “The Wall of Shame”. This new segment is in response to the the rampant cheating that occurs in online chess, specifically on chess.com. I’ve decided as a way of shaming these idiots, that I would post their names with some minimal commentary on our game. I’ll do this each post as I assume the cheating won’t stop.

The game that I wanted to analyze involved a “Greek gift” sacrifice. I feel like I haven’t done one of these in a while and it’s an important motif in chess. It’s always fun to share one of these as they do come up fairly frequently. For you beginners out there, the “gift” occurs when you sacrifice your bishop on h7 (or h2 if you’re playing Black). It isn’t much of a gift though as frequently accepting this gift results in a mating attack for the “giver”. Let’s have a look:

The Wall of Shame:

As I mentioned earlier, this is where I’m going to post the usernames of the idiots who decided to cheat against me on chess.com. Here are their names (and ratings in parentheses) :

Both of these accounts have been closed by chess.com; which is nice. It’s truly unfortunate that these losers feel the need to cheat at online chess when there is literally nothing at stake but pride and imaginary rating points.