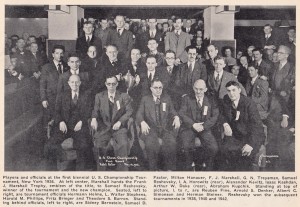 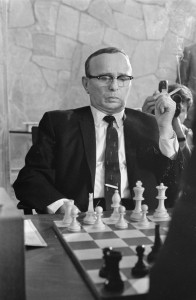 “Sammy” Reshevsky was a chess prodigy and later a leading American chess grandmaster. He was a strong contender for the World Chess Championship from the mid-1930s to the mid-1960s. He earned equal third in the 1948 World Chess Championship tournament, and equal second in the 1953 Candidates Tournament. He was an eight-time winner of the U.S. Chess Championship. An outstanding match player throughout his career, Reshevsky excelled at positional play. He could be a brilliant tactician when required. He took a long time over his opening moves, and often found himself under time pressure – but this sometimes unsettled his opponent more than it did Reshevsky. (From Wikipedia).
The 1936 US Championship went poorly for Reshevsky, he finished just 1/2 a point ahead of a player most of you have never heard of: Albert Simonson. Soltis and McCormick quote Reshevsky saying that for him, “the tournament will long remain something of a nightmare.”

Albert Simonson was one of the strongest American players in the 1930s. He was part of the American team that won the gold medals at the 1933 Chess Olympiad. Simonson was at least IM strength, but because of his limited playing career, he never received an international title. This was probably the best result he had in his career finishing just behind Samuel Reshevsky with 11/15.