Arguably the first “modern” US Championship because it implemented the Swiss system. Prior to this only matches were played to determine the US championship. In this championship the most common move was 1. d4!! The cross-table is given below (as generated by ChessDB, still my favorite database program even after all these years): 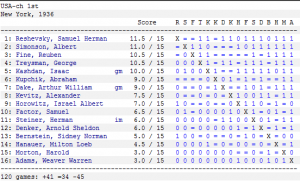 From the initial position 1.d4 was by far the more popular choice followed by the usual favorites e4, c4 and Nf3. The most frequent openings included some real oddballs:

So between the Budapest, the Sicilian Nimzowitsch?? and the Nimzo-Indian Spielmann Variation that incorporated 12 games, or 10% of the total games played. A bit crazy to think that people were playing the Sicilian Nimzowitsch in the US championship fairly frequently (more frequently than ANY other Sicilian line in fact). I am filled with artistic horror at the notion that this occurred. Thankfully we’ve come a long way since then.