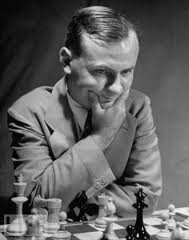 Reuben Fine was an American chess grandmaster, psychologist, university professor, and author of many books on both chess and psychology. He was one of the strongest chess players in the world from the late 1930s into the early 1950s. Many regarded Fine as a serious contender for World Championship although never got the chance to play for it. In 1948, he accepted an invitation to participate in the six-player 1948 World Championship. FIDE organized this tournament to determine the World Champion after the 1946 death of reigning champion Alexander Alekhine. Fine withdrew on the eve of the tournament citing professional commitments. Around this time, he virtually retired from serious competition.

George Nelson Treysman was a coffeehouse chess hustler who made his living by betting on games. He would usually offering material odds to his amateur chess opponents. His main base was the Stuyvesant
Chess Club, located on the Lower East Side of Manhattan in New York City. Denker called Treysman the best odds-giver at chess in the United States. 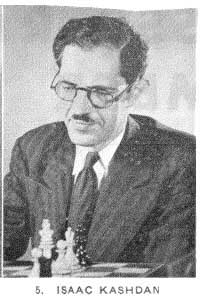 Alexander Alekhine named Kashdan one of the most likely players to succeed him as World Champion. Kashdan could not engage seriously in a chess career for financial reasons; his peak chess years coincided with the Great Depression. He resorted to earning a living as an insurance agent and administrator to support his family.

In 1942, Kashdan lost the playoff match to Reshevsky, and that was as close as he would ever come to being US champion (more about this later). Kashdan took over as chess editor for the Los Angeles Times after Steiner’s death. Kashdan played on five US Olympiad teams, winning many medals.