Harold Morton was New England Chess Champion in the 1937, beating Weaver Warren Adams in a title match by the score of 5:2:3. The several times New England Chess Champion died in a car accident on February 17, 1940, in Iowa. His fellow passenger Israel Albert Horowitz survived seriously injured. Both were partners in publishing Chess Review. Unfortunately, I was unable to find a picture and curiously he was not in the photo of all the candidates. 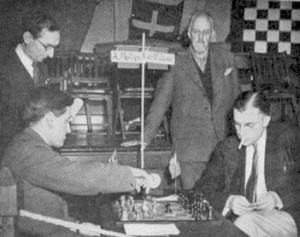 Weaver Warren Adams was an American chess master, author, and opening theoretician. His greatest competitive achievement was winning the U.S. Open Championship in 1948. He played in the U.S. Championship five times.

Adams is famous for his controversial claim that the first move 1.e4 confers a winning advantage upon White. He advocated this theory in books and magazine articles from 1939 until shortly before his death. The chess world has dismissed Adams’ claim.